A large village hall in the lovely village of Waverton, the hall and alongside playing fields are managed by a sub committe of Waverton Parish Council - The Waverton Village Hall & Playing Fields Managment committee, consisting of volunteer committe members, and affiliated members who use the hall.

Waverton Village Hall is primarily for the benefit of the local community, and priority will go to local organisations and events to benefit all members of the local community.  Tarporley Health Centre have a GP surgery at Waverton Village Hall, operating 5 sessions a week, and various nurse clinics take place, as well there is a pharmacy for the Health Centre users.

A Large and modern hall with a curtained stage area, with access to the Side room on the right, and the Community Hall on the left.  Two sets of double front doors allow access from the foyer where the male, female and disabled toilets are situated.  A kitchen and bar area are situated on the left top corner of the hall.

The size of a full badminton court with wooden flood, court markings, and a very high ceiling.  The hall has decorative sails that can be hung to create a lower ceiling effect for special events.

The SIDE ROOM is a long room with windows and access from the foyer and the side exit.  The room has a foldaway partition and can be divided into 2 connected smaller rooms.

The COMMUNITY HALL runs alongside the main hall divided by sliding doors,  it has velux windows. Access can be through the rear doors or via the main hall, it has a small kitchen area and 2 gender neutral toilet.

Both rooms can be set up with adult and/or child tables and chairs.

(Nurse clinic on Tuesday AM)

A successful family practice, working as a team, with well trained and motivated staff, to achieve a high standard of care for all

our patients.  Doctor and Nurse sessions, and a pharmacy in situ.

Following the transfer of the village school to its present site in April 1966, the

Parish Council leased the old school building opposite St. Peter’s Church from the

on 1 st .October 1967, run by a committee composed of representatives from village

organisations plus two members from the Parish Council – an arrangement which

continues in the running of the present Hall.

The first Hall operated for over 20 years, providing a daily venue for a

Youth Club. It was used regularly for a variety of other activities, including

badminton, ballet, Brownies, Cubs, Guides and Scouts, as well as catering for

facility and early in 1987, as owners of the former Victoria Mill and its site situated

on the canal at Egg Bridge, the Parish Council sold both building and site to

“Barratts” for housing development, for the sum of £330,000 This area is now the

known as the “Queen’s Field”, the Parish Council used some of the “Barratts”

money to purchase a piece of this land freehold from the Estate. It was on this piece

of land that the present Hall was built with the remaining “Barratts” money.

housed in a private dwelling, resulting in the design of the present Hall..

13 th . September 1989, having been in active use from some months earlier. 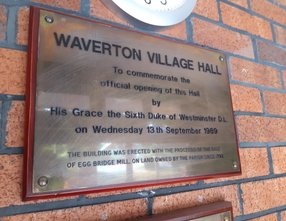 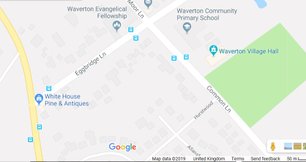